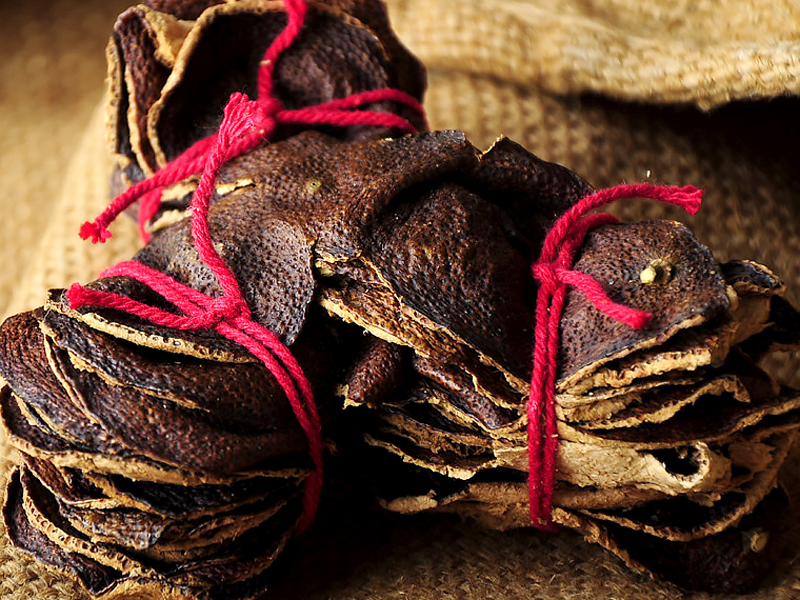 WHAT IT DOES: Tangerine peel is aromatic, warm and pungent in taste, and warming in action. It aids digestion, dries up mucus and reduces nausea.
It is one of the greatest sources of vitamin C on earth and should not be left out of your diet as a natural and potent way to enhance your immune system and ward off invasive infection. It is an old and reliable digestive, but important new research has demonstrated promising antioxidant activity. 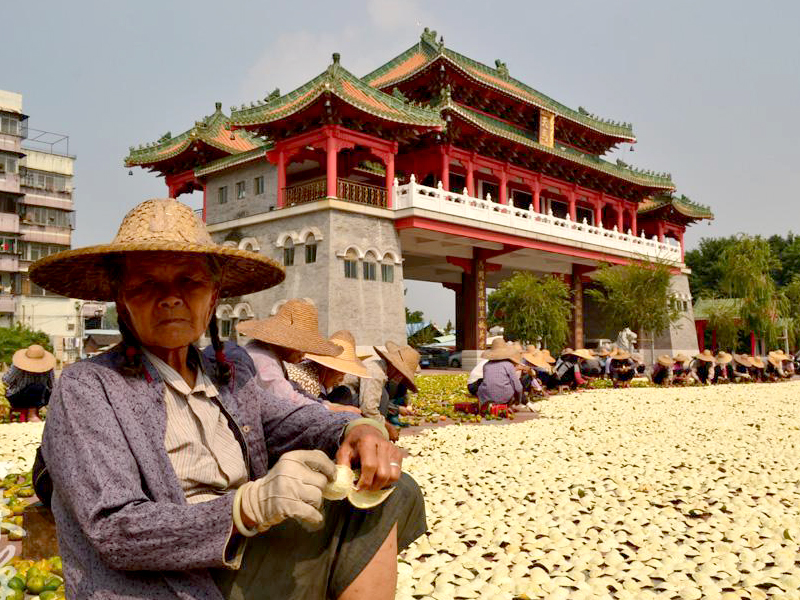 General Use in Chinese Herbal

Tangerine peel—called Chen Pi or, sometimes, Ju Hong, meaning red tangerine peel—has a lengthy history of use in traditional Chinese medicine.
It is commonly used to treat indigestion, diarrhea, vomiting and other forms of digestive weakness or upset, as well as hiccups and certain types of coughs (specifically, wet coughs involving excessive production of phlegm).
The peel of young green tangerines is called Qing Pi and is used to treat pain—particularly in the side and the breast, as well as pain from hernia. In addition, the green peel has been used in the treatment of low blood pressure and (in combination with other herbs) breast inflammation.

In traditional Chinese medicine, the dried peel of the fruit is used, often aged (sometimes until it turns black in color) and sometimes even toasted in a wok. Chen Pi means aged peel. A decoction is then made from the peel in combination with other herbs. Both the outermost peel (exocarp) and the inner peel (pericarp) are used for different specific medicinal purposes.

It is said to settle, regulate, and normalize the flow of qi (in traditional Chinese medicine, the term for life force), and to break up congestion.
In addition, it is believed to enhance the flow of liquids through the body.

Tangerine peel is also an ingredient in many traditional Chinese tonics. Among these are the Great Orange Peel Decoction used to treat gout, the Two Cure Decoction used to control morning sickness in pregnant women, and the Five Seed Decoction used to treat male sexual problems, including low sperm count, impotence, and premature ejaculation.
A related fertility-and-longevity formula, the Duke of Chou's Centenarian Liquor, is said to have been prescribed for the founder of the Chou Dynasty more than 3,000 years ago. Tangerine peel is also used to make Dr. Huang's Internal Injury Poultice, which is said to promote healing and ease inflammation in connection with pulled muscles, sprains, twisted tendons, and other sports injuries. 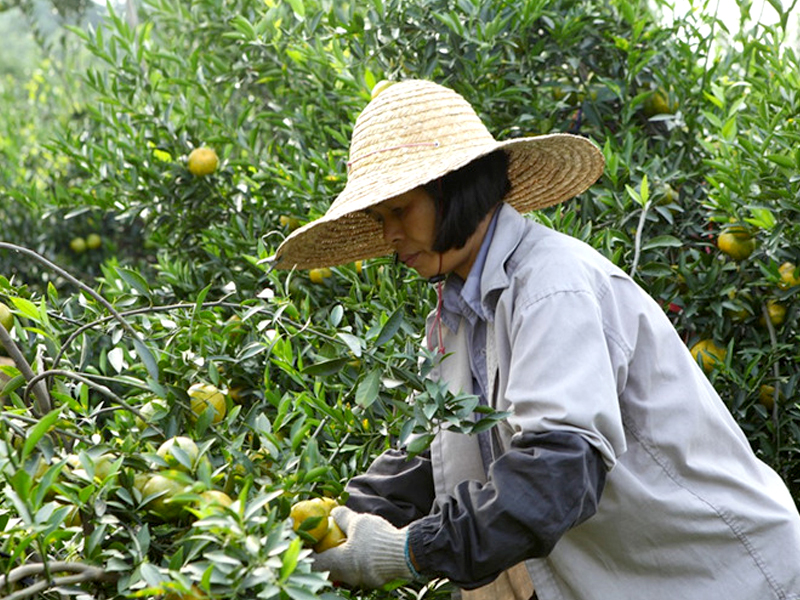 Benefits 1: Vitamin C
Tangerine Peel's high vitamin C content (and A) makes it a wonderful supplement to build immunity and combat invasive infection, colds, flu and many other ailments. Vitamin C is an antioxidant that protects your body's cells from damage, helps form the connective tissue collagen, keeps your capillaries and blood vessels healthy, and aids in the absorption of iron and folate.

Benefits 2: Fiber
Fiber helps you increase your bowel movement, lowers cholesterol, and controls your blood sugar levels. Also, it is said that fiber prevents heart disease and colon cancer.
The pectin in Orange Peel is a soluble fiber that may be helpful in lowering blood cholesterol and glucose levels. Soluble fibers are thought to prevent cholesterol absorption and slow the absorption of dietary sugar.

Benefits 3: Hesperidin
Hesperidin is present in high quantities in tangerines specially in the inner part of the skin (peel). It is said tha hesperidin has antioxidant and has anti-inflammatory effects on cells and tissues helping thus preventing aging and cancer.

Benefits 4: Supplement
Tangerine peel supplements commonly contain dried tangerine peel which has not been preserved with sulfur, and is totally natural. By choosing supplements that contain tangerine peel as an ingredient, you are insuring good digestion, less bloating and an increased metabolic rate. 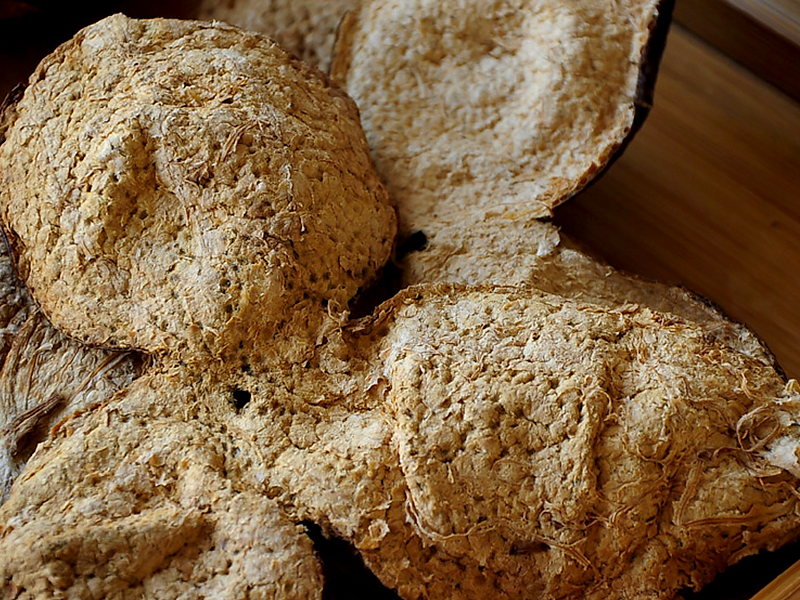 Tangerine Peel is an easily digestible, highly nutritious support for a healthy digestive tract and has helped ease gastrointestinal complaints such as dyspepsia, colic, flatulence, indigestion, diarrhea and heartburn and is said to be particularly effective in digesting fatty foods.
The pectin in Orange Peel appears to stimulate the growth of healthy bacteria that is effective in helping to prevent food-borne pathogens; and some folk healers have even claimed that Orange Rind may also help clear toxins (including lead poisoning) from the system.

Two major tangerine peel benefits are its cholesterol lowering capabilities and more recently its use in fighting cancer. The disease fighting flavonoids tangeretin and nobiletin are found in higher concentrations in peels that in the juice we commonly drink.

Tangerine Peel Weight Loss
Nutrients in tangerine peel promote weight loss, and are one of the most effective ways to fight obesity.
Tangerine peel also helps with absorption, and controls bloating and nausea. It has also been shown to stimulate the lymph system which helps eliminate excess fluid, and help combat obesity.
Tangerine peel is extremely effective for a multitude of digestion problems, which sometimes interfere with weight loss. This is why it is important to make sure your weight loss supplement contains this natural ingredient. Proper digestion is essential for weight loss.

Lower risk of heart disease.
The super-flavonoids found in tangerine peels are even thought by some to effectively lower cholesterol as well as some prescription drugs. Tangeretin and nobiletin are easily absorbed into the body and metabolized.

Tangerine peel is beneficial for treating nervous tension, depression, emotional stress and sleep related problems.
It helps to calm and soothe the nervous system, as well as the digestive system. Many digestive disorders are easily remedied by using this natural ingredient on soups, salads and other foods you eat.

Dry up mucous in the lungs and stomach.
It helps regulate and strengthen digestion, and is a component of many TCM formulas used to treat diarrhea, nausea, dyspepsia, and cough, especially when accompanied by copious sticky sputum.
Chinese pharmacological studies show that it increases the secretion of gastric juices and relaxes the smooth muscles in the gastrointestinal (GI) tract. It also stimulates secretion and expectoration in the lungs (reported in Yeung, 1983). TCM doctors say it moves the qi downward, so it also is useful for treating hiccups and vomiting. Immature tangerine peel (zhi shi) has similar properties, but shows a stronger unblocking action, and is most often used to treat digestive and mucous problems with constipation.

Tangerine Peel May Help Fight Cancer
UK researchers may have found a natural way to combat certain cancers. In tests, a chemical compound in tangerine peel attacked and destroyed cancer cells. The findings could lead to treatments for cancers of the breast, lung, prostate, and ovaries, Reuters says. “It is very exciting to find a compound in food that can target cancers specifically,” said one chemist.
The chemist speculated that the results reflected deficiencies in the modern diet, which typically excludes the skin of fruits. “This may be a major contributory factor to the increasing incidence of some cancers in the human population,” he said. Scientists caution that the research is still in an early phase and that more research is necessary.

Tangeritin, a bioflavonoid found in tangerine peel, has been shown to strengthen epithelial cells in a manner that inhibits the metastasis of cancer cells (Bracke et al., 1996). Naturopath Bill Mitchell explained in a lecture that the compound increases the functional integrity of E-cadherin, which is a cell-to-cell adhesive protein found to be deficient in tissue samples of most cancer patients. Based on these results, we can deduce that tangeritin, and its source, tangerine, might be useful as a cancer preventative. The reasoning is simple--about 80 percent of breast cancers start in the epithelial tissue lining the breast ducts, and this bioflavonoid makes the tissue tougher and more resistant.