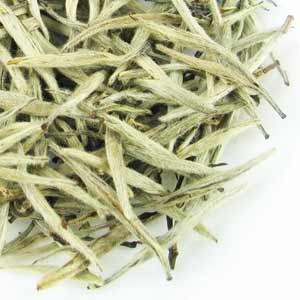 White tea (Chinese: 白茶; pinyin: báichá) is a lightly oxidized tea(Nonfermented) grown and harvested exclusively in the Fujian province,China.
The name "white tea" derives from the fine silvery-white hairs on the unopened buds of the tea plant, which gives the plant a whitish appearance.

White tea is the least processed form of tea. It comes from the delicate buds and younger leaves of the Chinese Camellia sinensis plant. These buds and leaves are allowed to wither in natural sunlight (also known as wilting) before they are lightly processed to prevent oxidation or further fermentation. This protects not only the delicate flavour of the white tea, but also retains high levels of the chemicals responsible for the tea's health benefits.
Because of its minimal processing, white tea contains more nutrients than other varieties of Chinese tea.

White tea has come a long way in its long history. It was largely unknown outside China and the Orient until recently. Now, with a renewed interest in fine tea and remarkable discoveries about its health benefits, white tea is being discovered and enjoyed around the world.
White tea originated in China, however the history of white tea is contested and complicated. Finding adequate citation is not easy when discussing China's teas in general because the system of knowledge is often orally transmitted. Scholars and tea merchants generally disagree as to when the first production of white tea (as it is understood in China today) began.

When working loosely with sources, claims are made that white tea is the oldest type of tea for various reasons, though it should be noted among the university appointed tea scholars in China debate focuses on whether red, green or black tea is the oldest form of tea, and white tea is conspicuously absent from this dialogue.

What is today known as white tea may have come into creation in the last two centuries.

Stories do appear referring to a "white" tea as that preferred tea of Chinese royalty, where it was first produced during the Tang Dynasty (618-907 A.D.). For some time, only the emperor and his courtiers would drink white tea as it was rare and expensive. However this "white" tea was produced differently than it is today. At this time leaves were compressed into cakes.

White tea became revered during China's Song Dynasty (960-1279). It was the choice of the royal court and was given as tribute to the emperor. White tea leaves and buds were ground into a silvery powder, which was then whisked in bowls during the Song Tea Ceremony.
One Song Emperor was renowned for his love of white tea. Hui Zong (1101-1125) became so obsessed with finding the perfect tea that he lost much of his empire.

Over the next several centuries, powdered white tea and the Song Tea Ceremony were abandoned for loose-leaf tea.

In 1391 the Ming court issued a decree that loose leaf tea would accepted as tribute and the production of loose leaf white tea became widespread.

Modern white tea production begun in the Qing Dynasty in 1796 where they were processed and distributed as loose tea and steeped in hot water. They were picked from a mixed varietal bush called Cai Cha during this time and differed from other teas in that they weren't de-enzymed by pan-firing or steaming and the leaves were often shaped. These created small, thin leaves with not much of the silvery-white down that can identify many of the white teas we know today.

By 1891 this careful section led to the familiar white haired leaves known as Silver Needle tea being exported from China and in 1922 the variety known as White Peony was created.