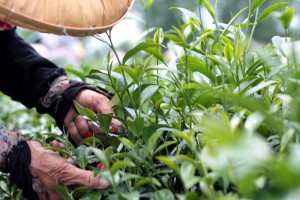 Among the six types of Chinese tea, green tea is the least processed. Because of this, its quality is heavily dependent on the quality of tea leaves picked.

Traditionally, high-grade Chinese green tea is harvested early spring before 5 April, or Qingmingjie. These teas are known as Mingqian or Pre-Ming.

However, this date 5 April should be only taken as a general guideline. The start of season varies with geography. It varies from February in Southern China to April in more Northern China.

Tea grade makes huge difference to price and quality. An early Pre-Ming can cost several times more than a late pick even from the same tea garden.

Standard practice of green tea harvesting is to start picking when 5% of the garden is ready. This happens when the tea buds reach certain size. Highly labour intensive, the best tea gardens are picked daily or every 2 days.

These high grades are available only in small quantities. They are handpicked and handroasted in the same day.

High grade tea leaves are young, tender, fat and consistent. Consistency leads to a clean look. Each tea shoot is complete and unbroken, free from old leaves, fruits and fragments.

Each tea shoot can consist of

These tea shoots are pointed rather than rounded. They are essentially buds, not leaves. Even if you brew them, the leaves do not open up.

The exact criterion varies with the type of gourmet tea. It doesn't necessarily mean single bud is better than one-bud-one-leaf.

White tea such as Silver Needle (Yingzhen Baihao) is made from single buds.

Green tea such as Longjing tea is never made from single buds.

Some teas, such as the Biluochun tea, are graded according to the bud size. The smaller the bud, the higher the grade.

Oolong tea is picked using half-matured leaves. An Anxi Iron Tieguanyin oolong tea is made from one bud with 2 to 4 leaves.

Green tea harvesting is hard work; a deft hand is needed. Young tea shoots are very tender. They mustn't be bruised or pressured during harvesting.

A standard pick is about 1.5 to 3.5 centimeters. One kilogram of gourmet green tea may contain 100,000 or more tea shoots. It may take a good picker half a day to harvest them.

A rule of thumb is that 4 parts of fresh leaves make 1 part of dried leaf.

All high-grade Chinese tea is still handpicked today. Machines exist only for lower grade teas. These tea shoots are just too tender to be machine cropped. 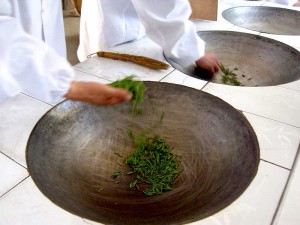 Unlike black tea, green tea is made with minimal oxidation. A process - called firing - applies high heat to kill the leaf enzymes to stop oxidation on its track, which resulted in the high catechins content of green tea.

The three firing methods account for the infinite varieties of green tea that exist in China and Japan today. All three methods were originally developed by the Chinese, as it long history affords it time to experiment and innovate.

Steaming was widely used in Chinese green tea processing until the 16th century. It has regained popularity in recent years, especially for export to Japan.

Early Tribute teas were steamed. Japanese monk Kobo Daishi learnt this when he visited China in A.D. 804 and introduced tea drinking to Japan with the Chinese tea seeds he brought back. Today, the majority of Japanese green tea is steamed.

Today, roasting or pan-firing is the most popular firing method for Chinese green tea. Like stir-frying Chinese food, the traditional handicraft uses an iron wok on a hot stove.

It was preferred over steaming for 2 reasons: it is quicker to roast and it smells better.

Using several distinct hands movements, a skillful roaster is able to handroast leaves into many different shapes using their bare hands. It is an incredible art form.

Both Meicha (Hyson) (and Zhucha (Gunpowder) use mature leaves for processing and were developed for export to the Western world.

Baking can be done using either a charcoal or an electric oven. It is preferred over roasting when it is important to preserve the shape and texture of the pre-processed tea, such as when making jasmine scented green tea.

Floral and fruity green tea is usually baked rather than roasted.

Many Chinese green tea processing is half-roasted and half-baked, allowing the advantages of each method to be exploited.

While most tea today is machine-made, the best Chinese green tea is still entirely handroasted, allowing the roasters to fine tune the tea making process to optimize the quality of the individual leaves.