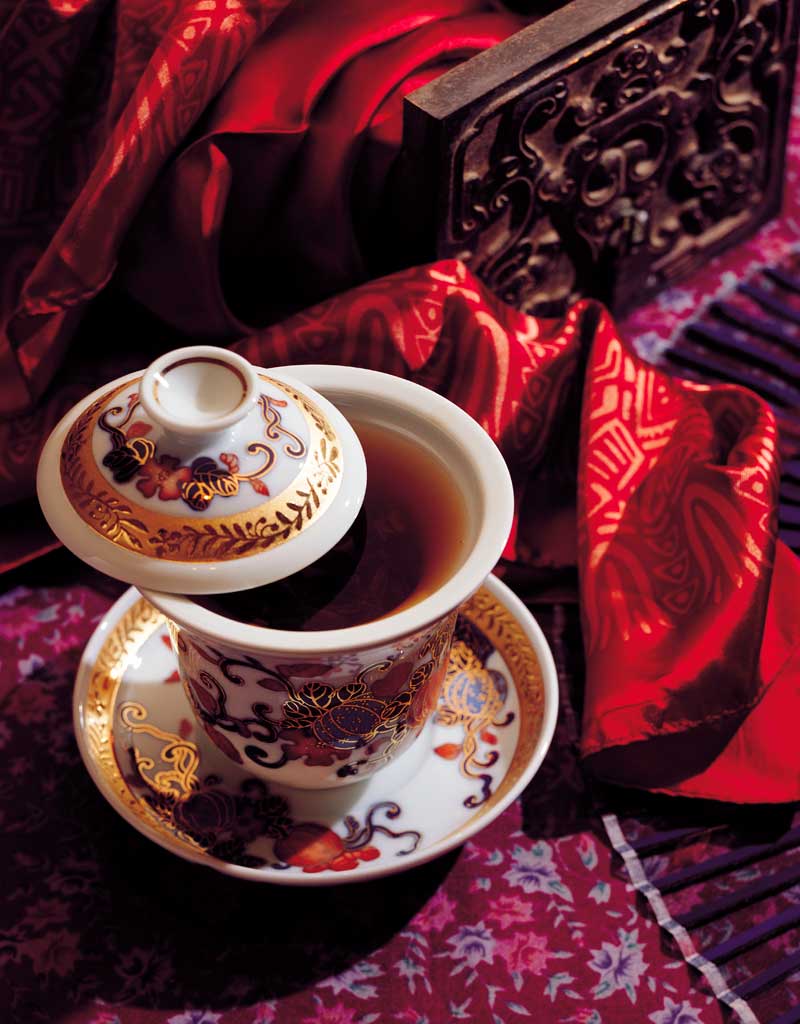 Black tea is a variety of tea that is more oxidized than the oolong, green, and white varieties. All four varieties are made from leaves of Camellia sinensis. Black tea is generally stronger in flavor and contains more caffeine than the less oxidized teas.
Two principal varieties of the species are used, the small-leaved Chinese variety plant (C. sinensis subsp. sinensis), also used for green and white teas, and the large-leaved Assamese plant (C. sinensis subsp. assamica), which was traditionally only used for black tea, although in recent years some green has been produced.

In Chinese languages and neighboring countries, black tea is known as "red tea" (紅茶, Mandarin Chinese hóngchá), a description of the colour of the liquid; the term black tea refers to the colour of the oxidized leaves. In Chinese, "black tea" is a commonly used classification for fully-fermented teas, traditionally refers to Wu Cha(乌茶); in the Western world, "red tea" more commonly refers to rooibos, a South African tisane.

The question of when black tea was invented remains much debated amongst tea scholars. All we can surely say is that by the 16th century black tea was appearing in Chinese tea markets. Its clear though, if one was to search for the real origin of black tea production, you’d have to go back a little further.

Some people might argue that black tea’s story began with the early days of the Ming Dynasty in the period of Ming Hong Wu Lian (1391). By this
point, tea drinking customs had proliferated through every strata of Chinese society, spread through China’s border regions and embellished into unique tea cultures in Korea and Japan.

Traded from one end of the Chinese map to the other, tea was manufactured in to the form of portable, tightly compressed cakes of what we would now consider to be green tea. In their time, these cakes of tea were worth more than their weight in gold and could easily stand in for hard currency. Every meticulous step of their production, from tea bush to tea market was a government controlled institution. By the end of the Song Dynasty, the government tea trade was renowned for both its wealth and its corruption, but this was all to change with the coming of a new regime.

The newly seated Ming emperor, Zhu Yuan Zhang, in an inventive political effort to combat corruption in the tea trade, ordered the production of compressed tea cakes to a halt. It was decreed that tea take a simpler, less currency-ready form: the loose leaf. The coming of loose leaf tea was a critical development, setting the stage for a number of further innovations in tea craft, one of which being black tea.

Right up until the Ming emperor shut down compressed tea production, some of the best cakes of tea came from the mountainous region of Wu Yi Shan. Wu Yi Shan was a famous tribute tea area since the Song Dynasty (960-1279) but when faced with the radical shift in production methods instituted by the Ming Dynasty, Wu Yi Shan’s tea factories fell dormant, ill-equipped for producing this new form of tea.

Nearly one hundred and fifty years passed with little tea to speak of emerging from the government factories in Wu Yi Shan. Yet tea remained in the region, cultivated and processed at a small scale by the monks of Wu Yi’s many monasteries.  A shelter from this dark age, Wu Yi Shan’s monasteries began to manufacture loose leaf tea for market with an attempt to copy An Hui province’s technique for making a famous pan-fried loose leaf green tea called Song Luo.

The producers in Wu Yi Shan, having never made this tea before, naturally made some mistakes. It’s mentioned in contemporary logs that the color of the leaves was turning out red – a sure sign that this tea’s producers were failing to stop cellular oxidation from occurring in their tea leaves. Heavy cellular oxidation is the defining characteristic of black tea and it’s worth mentioning here that black tea has always been referred to as “red tea” by the Chinese, named for the conspicuous color of oxidized leaves.  Thus, black tea (or red tea) was finally born by these misguided attempts to make a green tea in the monasteries of Wu Yi Shan at the end of the 16th century.

There is another, perhaps more colorful, story of black tea’s genesis that comes from the local lore of Tong Mu Village in Wu Yi Shan. The Jiang family, of which Seven Cups’ Lapsang Souchong producer hails, has a history of 24th generation in Tong Mu Village and claims the honor of resourcefully inventing black tea after disaster struck the tea crop of the village.
Tong Mu village in Wu Yi Shan lies in a geographical gateway, connecting China’s southeast coast to its central interior. One spring in the mid 16th century, Tong Mu village found itself in the path of a moving army. With soldiers occupying their buildings, the village’s peasant farmers were cut off from processing a freshly plucked crop of tea.  As far as the soldiers were concerned, a pile of soft tea leaves made a nice bed while they were in quarter. In the course of a week, the army moved on, leaving behind piles of dark tea leaves, twisted and blackened with bruising. The weight of the solders and the heat of their bodies coupled with the heat of natural fermentation caused by pressure, heat, and moisture, caused the tea to change. The crop of green tea was effectively ruined, if not for a stroke of perseverance.
Allegedly, it was the one of the Jiang family’s great ancestors who demanded the tea be dried and sent to market anyway.

With astonishment, foreign merchants took to this radically different kind of tea, not only buying out the entire crop, but sending a payment for the whole of next year’s crop as well.  There is some confusion about the details of this story, and some say these events couldn’t have taken place until the Tai Ping revolt in between 1850 and 1860, when soldiers invaded the Wu Yi Mountains and Tong Mu. Whether or not this story is true, it sets an accurate picture of the culture in China’s black tea production. Considered to be something of unorthodox taste in China’s domestic market, black tea has solely been pursued as a profitable export. Ironically stranger in its own home, this was the tea that was to conqueror the world.

When the Dutch East India Company first carried tea as merchant cargo in 1610, they had bought their tea at Indonesian markets where it had been exported from China. At that time, the southeast coast of China was kept unpopulated by government force and there were no harbors open for trade. With the coming of the Qing Dynasty, the closed coastline policy was dissolved by 1684, tea became available to western merchants in unprecedented volume from markets in Fujian. It was the Fukinese tongue that named black tea for the rest of the world.  “Lei Xun” or “Smoke scented” in Fuzhuou dialect, is considered by many to be the etymological origins of the word “Lapsang” – as in “Lapsang Souchong.” “Bohea” (pronounced “Boo Hee”) is derived from the Fukienese pronunciation of “Wu Yi.” In that day, the Wu Yi mountains were the only producer of black tea. Thus the name “Wu Yi” or “Bohea” was synonymous with black tea. This name for black tea persisted in use, even when black tea was being produced elsewhere.