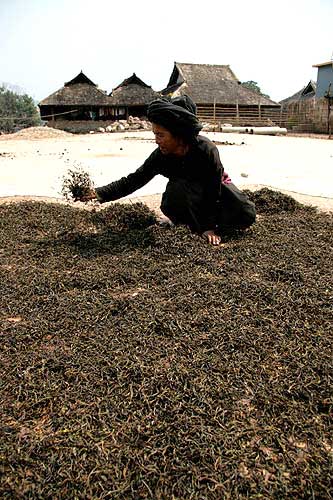 Pu-erh tea is traditionally made with leaves from old wild tea trees of a variety known as "broad leaf tea" (Traditional: 大葉 Simplified: 大叶, dà yè) or Camellia sinensis var. assamica, which is found in southwest China as well as the bordering tropical regions in Burma, Vietnam, Laos, and the very eastern parts of India.

The shoots and young leaves from this varietal are often covered with fine hairs, with the pekoe (two leaves and a bud) larger than other tea varietals. The leaves are also slightly different in chemical composition, which alter the taste and aroma of the brewed tea, as well as its desirability for aging.

Due to the scarcity of old wild tea trees, pu-erh made using such trees blended from different tea mountains of Yunnan are highly valued, while more and more connoisseurs are seeking pu-erh with leaves taken from a single tea mountain's wild forests. The history of pu-erh tea can be traced back to the Eastern Han Dynasty.

Pu-erh is well known for the fact that it is a compressed tea and also that it typically ages well to produce a pleasant drink. Through storage, the tea typically takes on a darker colour and mellower flavour characteristics. Often pu-erh leaves are compressed into tea cakes or bricks, and are wrapped in various materials, which when stored away from excessive moisture, heat, and sunlight help to mature the tea.

Pressing of pu-erh into cakes and aging the tea cakes possibly originated from the natural aging process that happened in the storerooms of tea drinkers and merchants, as well as on horseback caravans on the Ancient tea route (茶馬古道; pinyin: chámǎ gǔdaò) that was used in ancient Yunnan to trade tea to Tibet and more northern parts of China.Compression of the tea into dense bulky objects likely eased horseback transport and reduced damage to the tea.