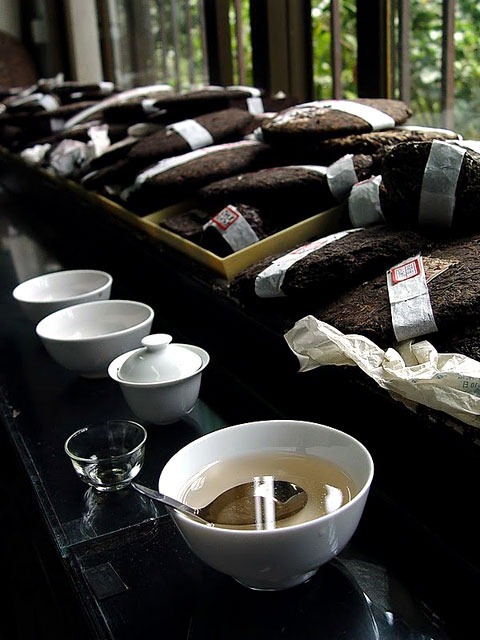 Spent leaves of badly stored ripened pu-erh. Note the crumbling leaf faces that are barely held together by leaf veins

Quality of the tea can be determined through inspecting the dried leaves, the tea liquor, or the spent tea leaves. The "true" quality of a specific batch of pu-erh can ultimately only be revealed when the tea is brewed and tasted.

Although, not concrete and sometimes dependent on preference, there are several general indicators of quality:

In Cantonese culture, pu-erh is known as po-lay (or bo-lay) tea. Among the Cantonese long settled in California, it is called bo-nay or po-nay tea. It is often drunk during dim sum meals, as it is believed to help with digestion. It is not uncommon to add dried osmanthus flowers, pomelo rinds, or chrysanthemum flowers into brewing pu-erh tea in order to add a light, fresh fragrance to the tea liquor. Pu-erh with chrysanthemum is the most common pairing, and referred as guk pou or guk bou (菊普; pinyin: jú pǔ). Pu-erh is considered to have some medicinal qualities.

Sometimes wolfberries are brewed with the tea, plumpening in the process.