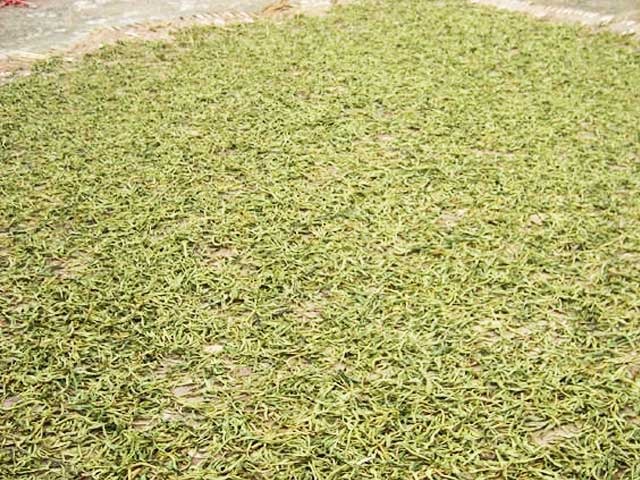 All types of pu-erh tea are created from máochá(毛茶), a mostly unoxidized green tea processed from a "large leaf" variety of Camellia sinensis found in the mountains of southern Yunnan. Maocha can undergo "ripening" for several months prior to being compressed to produce ripened pu-erh (also commonly known as "cooked pu-erh"), or be directly compressed to produce raw pu-erh.

While unaged and unprocessed raw pu-erh is technically a type of green tea, ripened or aged raw pu-erh has occasionally been mistakenly categorised as a subcategory of black tea due to the dark red colour of its leaves and liquor. However, pu-erh in both its ripened or aged forms has undergone secondary oxidization and fermentation caused both by organisms growing in the tea as well as from free-radical oxidation, thus making it a unique type of tea.

In China, where fully-oxidised tea ("black tea") is known as "red tea," pu-erh is indeed classified as a "black tea" (defined as post-fermented), something which is resented by some who argue for a separate category for pu-erh as many other black teas tend to be of lower standard and status.

After picking appropriate tender leaves, the first step in making raw or ripened pu-erh is converting the leaf to máochá (青毛茶 or 毛茶; literally, "light green rough tea" or "rough tea" respectively). Plucked leaves are handled gingerly to prevent bruising and unwanted oxidation. Weather permitting, the leaves are then spread out in the sun or a ventilated space to wilt and remove some of the water content.On overcast or rainy days, the leaves will be wilted by light heating, a slight difference in processing that will affect the quality of the resulting maocha and pu-erh. The wilting process may be skipped altogether depending on the tea processor.

The leaves are then dry pan-fried using a large wok in a process called "kill green" (殺青; pinyin: shā qīng), which arrests enzyme activity in the leaf and prevents further oxidation. With enzymatic oxidation halted, the leaves can then be rolled, rubbed, and shaped through several steps into strands. The shaped leaves are then ideally dried in the sun and then manually picked through to remove bad leaves.Once dry, máochá can be sent directly to the factory to be pressed into raw pu-erh, or to undergo further processing to make ripened pu-erh. Sometimes maocha is aged uncompressed and sold at its maturity as aged loose-leaf raw pu-erh.

Ripened pu-erh. Note the orange-brown tone of the lighter leaves due to oxidation/fermentation.

Ripened pu-erh tea (Chinese: 熟茶; pinyin: shúchá) is pressed maocha that has been specially processed to imitate aged raw pu-erh. Although it is more commonly known as "cooked pu-erh," the process does not actually employ cooking to imitate the aging process. The term may come about due to inaccurate transliteration due to the dual meaning of "shú" (熟) as both "fully cooked" and "fully ripened"。

The process used to convert máochá into ripened pu-erh is a recent invention that manipulates conditions to approximate the result of the aging process by prolonged bacterial and fungal fermentation in a warm humid environment under controlled conditions, a technique called wòdūi (渥堆, "wet piling" in English), which involves piling, dampening, and turning the tea leaves in a manner much akin to composting.

The piling, wetting, and mixing of the piled máochá ensures even fermentation.
The bacterial and fungal cultures found in the fermenting piles were found to vary widely from factory to factory throughout Yunnan, consisting of multiple strains of Aspergillus spp.,Penicillium spp., yeasts, as well as wide range of other microflora.

Control over the multiple variables in the ripening process, particularly humidity and the growth of Aspergillus spp., is key in producing ripened pu-erh of high quality. Poor control in fermentation/oxidation process can result in bad ripened pu-erh, characterized by badly decomposed leaves and an aroma and texture reminiscent of compost. The ripening process typically takes anywhere from half a year to one year after it has begun.

This process was first developed in 1972 by Menghai Tea Factory and Kunming Tea Factory[8] to imitate the flavor and color of aged raw pu-erh. This technique was an adaptation of "wet storage" techniques that were being used by merchants to falsify the age of their teas. Mass production of ripened pu-erh began in 1975. It can be consumed without further aging, though it can also be stored to "air out" some of the less savory flavors and aromas acquired during fermentation. The tea is often compressed but is also common in loose form. Some collectors of pu-erh believe that ripened pu-erh should not be aged for more than a decade. 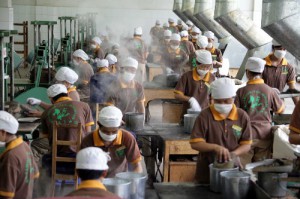 A "Hand-pressed" pu-erh bing, revealing the hollow knot dimple in its rear face and an uneven edge

To produce pu-erh many additional steps are needed prior to the actual pressing of the tea. First, a specific quantity of dry máochá or ripened tea leaves pertaining to the final weight of the bingcha is weighed out. The dry tea is then lightly steamed in perforated cans to soften and make it more tacky. This will allow it to hold together and not crumble during compression. A ticket, called a "Nèi fēi" (内飞) or additional adornments, such as coloured ribbons, are placed on or in the midst of the leaves and inverted into a cloth bag or wrapped in cloth. The pouch of tea is gathered inside the cloth bag and wrung into a ball, with the extra cloth tied or coiled around itself. This coil or knot is what produces the dimpled indentation at the reverse side of a tea cake when pressed. Depending on the shape of pu-erh being produced, a cotton bag may or may not be used. For instance, brick or square teas often are not compressed using bags.

Depending on the desired product and speed, from quickest and tightest to slowest and loosest, pressing can either be done by:

A hydraulic press, which forces the tea into a metal form that is occasionally decorated with a motif in sunken-relief. Due to its efficiency, this method is commonly used to make all forms of pressed pu-erh. Tea can be pressed in the press either with or without it being bagged, with the latter done by utilizing a metal mould. Tightly compressed bing, formed directly into a mold without bags using this method are known as tié bǐng (鐵餅, literally "iron cake/puck") due to its density and hardness. It is believed that the taste of densely compressed raw pu-erhs can benefit from careful aging for up to several decades.

A lever press, which was operated by hand for tight pressings and has largely been replaced by the modern hydraulic press.

A large heavy stone, carved into the shape of a short cylinder with a handle, simply weighs a bag of tea down onto a wooden board. The tension from the bag and the weight of the stone together gives the tea its rounded and sometimes non-uniformed edge. Due to the manual labor involved, this method of pressing is often referred to as: "Hand" or "Stone-pressing," and is how many artisanal pu-erh bing are still manufactured.

Pressed pu-erh is removed from the cloth bag and placed on latticed shelves where they are allowed to air dry, which depending on the wetness of the pressed cakes may take several weeks or months. The pu-erh cakes are then individually wrapped by hand, and packaged in larger units for trade or commerce.