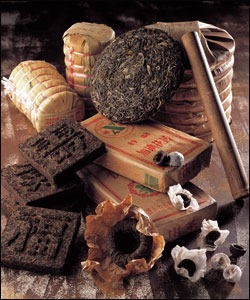 Pieces of a 1970's "Green/raw" Guang yun tribute teacake(廣雲貢餅). Note that aging has turned the previously green leaves of this cake to a brownish black colour

Pu-erh can be green teas if they are lightly processed before being pressed into cakes. Such pu-erh is referred to as maocha if unpressed and as "green/raw pu-erh" if pressed. While not always palatable, they are relatively cheap and are known to age well for up to 20 or 30 years. Pu-erh can also be a fermented tea if it undergoes slow processing with fermenting microbes for up to a year. This pu-erh is referred to as "ripened/cooked pu-erh", and has a mellow flavour and is readily drinkable. Aged pu-erhs are secondary-oxidation and post-fermentation teas. If aged from green pu-erh, the aged tea will be mellow in taste but still clean in flavour.

According to the production process, four main types of pu-erh are commonly available on the market:

Maocha: Green pu-erh leaves that are sold in loose form. The raw material for making pressed pu-erhs. Badly processed maocha will result in an inferior pu-erh.

Ripened/cooked pu-erh: Pressed maocha that has undergone fermentation in the ripening process for up to a year. Badly fermented maocha will create a muddy tea with fishy and sour flavours indicative of inferior aged pu-erhs.

Aged raw pu-erh: A tea that has undergone a slow secondary oxidation and a certain degree of microbial fermentation. Although all types of pu-erh can be aged, it is typically the pressed raw pu-erhs that are most highly regarded, since aged maocha and ripened pu-erh both lack a "clean" and "assertive" taste.

23 thoughts on “Pu-erh Process and Oxidation”