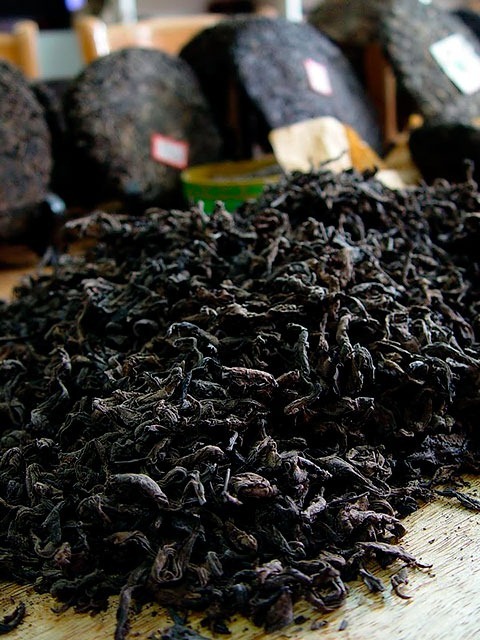 Tea factories, particularly formerly government-owned factories, produce many cakes by its recipe tea blends, indicated by a recipe number. Recipe numbers consists of four-digits. The first two digits represent the year the recipe was first produced, the third digit the grade of leaves used in the recipe, and the last digit represents the factory.

7542, for example, would be a recipe from 1975 using fourth-grade tea leaf made by Menghai Tea Factory (represented by 2). There are also those who believe that the third number indicates a recipe for a particular production year. 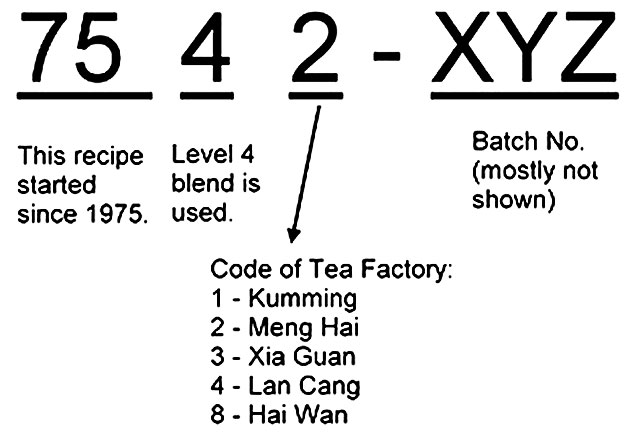 Tea of all shapes can be made by numbered recipe. Not all recipes are numbered, and not all cakes are made by recipe. The term "recipe," it should be added, does not always indicate consistency, as the quality of some recipes change from year-to-year, as do the contents of the cake. Perhaps only the factories producing the recipes really know what makes them consistent enough to label by these numbers.

Occasionally, a three digit code is attached to the recipe number by hyphenation. The first digit of this code represents the year the cake was produced, and the other two numbers indicate the production number within that year. For instance, the seven digit sequence 8653-602, would indicate the second production in 2006 of factory recipe 8653. Some productions of cakes are valued over others because production numbers can indicate if a tea was produced earlier or later in a season/year. This information allows one to be able to single out tea cakes produced using a better batch of máochá.