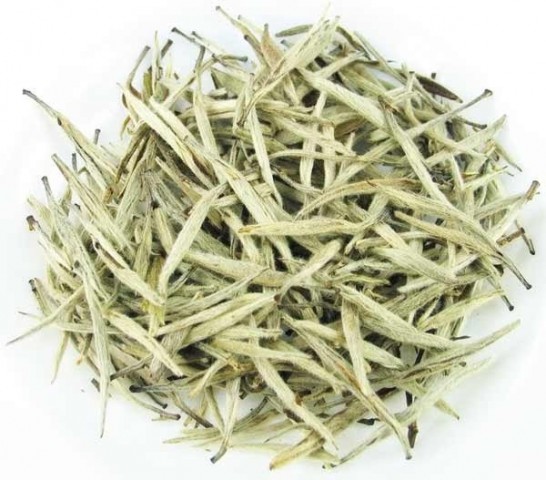 Silver Needle is one of the rarest and most spectacular teas.

The production of this tea merely makes up not even 0.1% of the tea produced in China.

This needle shaped white tea is mainly produced in Fujian, China, which is famous for the outstanding quality of their white tea.

The reason for the name, "Silver Needles", is quite apparent as with one glance at the buds; the prominence of the delicate white hairs on the buds is quite striking.

During early Spring, each bud is carefully plucked from the Da-bai cultivar (Da-bai cha-shu).

White teas differed from green teas in that their processing does not incorporate any steaming or pan-firing.

To produce Silver Needle, the tea has to undergo the long-hour withering which causes the non-enzymatic oxidation that gives the unique characteristics of white tea.

The withered buds are then dried on smoldering fire (Wen-huo).

One of the unique processing steps is this tea is packed right after drying while the tea is still warm.

This is vital to preserve its needle shape; if it is cooled down, the tea is susceptible to breakage while packing.

When brewed in hot water, the buds point upwards, and while remaining in the upright position,

the water-absorbed buds gradually sink downward to the bottom of glass, which looks like stalactite.

A long time ago, legend has it that the people who lived at the Fujian area were experiencing a dry spell which was threatening the lives of the villagers.

It was believed that a celestial plant was growing at a mountain in the Fujian region which was guarded by a black dragon.

This plant is believed to cure many kinds of illnesses and it will bring up the water when the juice of this plant is dropped into the river which had run dry.

Many villages went looking for this special plant but failed and subsequently were turned into rocks at the mountain.

A young lady, whose two brothers also went there but were sacrificed, decided to try her luck too.

When she reached the mountain, the black dragon attacked her viciously but she cunningly managed to kill the dragon.

The young lady then was able to pluck the celestial plant and dropped its juice onto the people who has turned into rocks, and all the villagers were transformed back into human beings.

Thanks to her courage and good effort, the villagers were very grateful to be alive.

They transferred the plant from the mountain and planted it widely in their villages.

Due to its silvery white color and needle shape, it was named "Silver Needle".

During the Song Dynasty (year 1107), white tea was developed using the tea leaves plucked from the specific tea cultivars, and processed according to the way of making green tea.

Its unique process is also documented in the Ming Dynasty tea books. During the Qing Dynasty (1772-1782), the commercial production of white tea emerged.

During early 19th century, Zheng-He district started its mass production of Silver Needles and mostly sold it to European countries; the production was interrupted during World War I (1918), and resumed after 1926.

It then gave rise to the massive production of Silver Needle at Fuding district thanks to its fleshy bud which was highly appreciated.

While Chinese tea drinkers have been hip to white tea's benefits since the Ming Dynasty, until recently it was virtually unknown outside of Asia. Not anymore.

White teas are unfermented teas made from very young tea leaves or buds that are steamed immediately after harvest to inactivate polyphenol oxidase and then dried.

One thought on “About Bai Hao Yin Zhen-the Silver Needle”