The History of Taiping Houkui 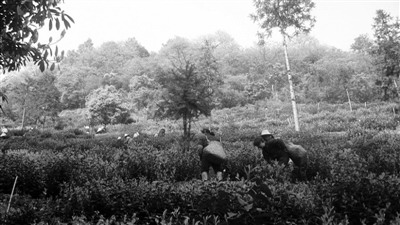 The Taiping Houkui is a China historical tea, it was produced as early as the Qing Dynasty at Anhui Province. It belongs to the rare group of tea, i.e., the sharp-shaped green tea ( Jian-cha). Its name refers to its shape: the pointed shape at the sides, the top and the end. The name Houkui means the Monkey King.

Legend has it the Taiping Houkui tea tree was transformed from the monkey king that fell sick and died at the mountain area after loosing his son. A farmer came across this sad incident and buried his body right there. The next year, some tea trees began to grow at the place where his body was buried. It is believed that the tea trees were transformed from monkey king who gave it to the farmer as a token of appreciation for his kind deed. The farmer took good care of the tea tree, harvested the leaves and made it into this sharp-shaped tea. From then onwards, its unique flavor and taste gained much attention from the villages and became popular and famous.

Another record claimed that the production of the sharp-shaped tea (Jian-cha) bloomed during the Qing Dynasty. Taiping County (Tai-ping Xian) was one of the most productive areas in Anhui, that’s where the name Taiping is derived from. At Taiping County, there was a tea center where people sent their tea product for commercial trade. In the past, people used to produce Jian-cha which contains various numbers of leaves, and usually the tea contained a lot of matured leaves. In the latter stage, some people started to select the dry leaf which contains only one bud with 1-2 leaves from the finished product, and sold it. This selected tea was highly appreciated and can be sold at much higher price. This inspired a farmer named Wong Kui-Cheng who started to produce this tea using fresh leaves which contained one bud with 1-2 leaves rather than selecting the dry leaf after the process. It was very successful and the tea produced was highly praised and sought after.
As his tea was the best quality among the sharp-shaped green tea produced (Kui-shou), and his name is Kui-Cheng, furthermore it was produced at Hou-keng area, it was only logical that the name Taiping Houkui was begotten.

1900: This tea was first brought to the exhibition held by the agricultural and commercial department at Nanjing; it was highly praised and became a renowned tea to the public.
1915: In order to celebrate the launching of Panama Canal, the United State of America held the unprecedented World Expo at Panama. China introduced and contested in several teas, including Taiping Houkui, Keemun Black Tea, etc. Taiping Houkui won a gold prize.
1916: It was granted another gold prize during the commercial expo at Jiangsu Province.
1955: It was selected as one of the Top Ten teas in China.
1988: At the First China Food Expo, it won a gold prize.
2004: It was given the highest honor prize (The King of Tea, Cha-wang) at the China International Tea Expo held at Wu Lake (Wu Hu) at Anhui Province.

By far, the Taiping Houkui has been one of the sought after gift teas presented to foreign visiting dignitaries to China.

1423 thoughts on “The History of Taiping Houkui”