1. About the origin of the Yixing purple clay tea pot.

Yixing,a picturesque city,is located on the Taihu Lake in Jiangsu province, China. The city is famous for its rich resources and outstanding talents. Among the products,ceramics are the most famous. Based on the textual and archaeological researches, in the Neolithic Age as far as 5000 years ago,the forefathers of Yixing were engaged in the farming and the pottery marking. Some ruins of ancient pottery workshops and kilns in Yixing Ding Shu town have always been found in recent years. There are 5 neolithic site(5000 years ago),3 Han Dynasty Kiln site(Before206-A.D.220), 3 Six Dynasty Kilns(A.D.420-A.D581),9 Sui Dynasty,Tang Dynasty kilns(A.D.581-A.D.907),20 Song Dynasty,Yuan Dynasty kilns(A.D.960-A.D.1368).60 Ming Dynasty,Qing Dynasty kilns(A.D.1368-A.D.1911).One of the Tang Dynasty's Dragon Kiln,located in the east of Ding Shu Town, it is 700 square metres ,80 stere and has fire ware ability. Yixing purple clay tea pots were produced base on a long pottery tradition in Yixing.

Another important diathesis ,Yixing is a famous tea area in ancient China,one kind of Yixing tea (the Yun Wu Tea) was the tribute tea during early Tang Dynasty. The total quantity is over 5000 kgs. During Tang Dynasty, there are ten thousands tea workers picking tea every year, over 30 tea factories.The most famous tea master Lu Yu used to visit Yixing for enjoying the Yixing tea regularly at that time. 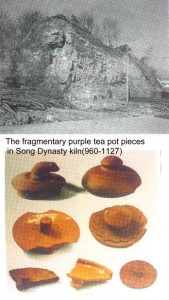 The most important diathesis is that the rare purple clay was found in the mountains of Ding Shu Town in Yixing. The purple clay has very unusual characteristic ,it is the best material for tea pot in the world. In 1976,one of the Song Dynasty Dragon Kilns was found on the Yang Jiao mountain of Ding Shu town, together with many fragmentary of purple clay teapots.(img.left).

For the origins of the purple clay tea pot, he mentioned 'A bare foot monk who lives in JingSha temple in DingShu interests in studying pottery with potters. He creates some simple and unique tea pots with purple clay for his own interests. (PS: There are many temples inancient China, many monks who lived there were drinking tea with a bowl. The tea pot ishard to find during that period)

A learned man named WuYuShan came to Jing Sha temple for study. His servant Gong Chun accompanied him. Gong Chun has been learning to make the purple clay tea pot with the monk in his spare time. He imitated the burl of an old tree in the temple and made a unique pot, which is the famous 'Gong Chun Pot'. Many researchers believe it is the first purple clay tea pot in its true sense.

(PS: This pot iscollected inChina History Museum noww. cover has been lost during the war and was added by Qing Dynasty Craftwork Master Wang YuLing. )

2. The developing of Yixing purple tea pot during  Ming Dynasty 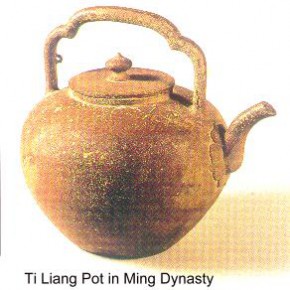 There has been emerged in a number of masters since Wan Li Year to the end of Ming Dynasty. The most famous one is Mr. Shi Da Bing(Shi Peng’s son),who has enjoyed a very high reputation at that time. It has been very difficult to get his works, even the moguls.
There were only 7 pieces in China are really Shi Da Bing’s tea pot at present. Meanwhile, there are 15-20 pieces abroad. Shi Da Bing was very strict with his works. The tea pots will be smashed if they are not perfect. Many craft work masters copied Shi Da Bing’s pot in Qing Dynasty, include some famous ones.

3. The thriving and prosperous of purple tea pot During Qing Dynasty 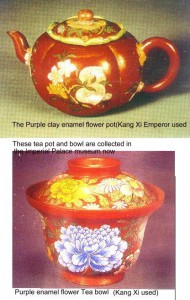 Kang Xi, the emperor of early Qing Dynasty, likes purple clay tea pots very much. However, he prefers to add colour enamel onto the pots and made them look more showy. He prohibited the pot makers to seal on the tea pots. Only the title of the emperor could be shown on the tea pots. This rule was continued to Yong Zheng emperor and Qian Long emperor. So you will not be able to see the seal of the makers on the tribute tea pots in early Qing Dynasty. 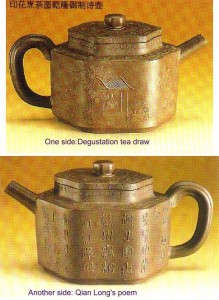 After Qiang Long era, more purple tea pots entered into the palace. There were no strict restricted about the seal of the makers, so it's easy to find many purple clay tea pots with famous craft work master's seal in the Imperial Palace after Qian Long Emperor.

In 1685, Kong Xi emperor agreed to have trade relations with oversea,so purple clay tea pots were exported to Europe with Chinese tea. Soon, Europe people were attracted by them. They praise it as 'Red Porcelain'. In 1711, Mr Bo Te Ge, a famous potter from German,succeed made 2000 pcs red pottery tea pot imitate yixing purple teapot, and writed disquisition 'Red sand porcelain'. There is one Yixing Purple tea pot that was collected in the state museum of denmark,which was used by the king of denmark in 1674. Yixing purple clay tea pot was exported to Japan, East-South Asia, Central America etc contries since 17 century and 18 century.

In early days of Qing Dynasty,The most famous great master is Mr Cheng Ming Yuan, it was recorded in 'Yang Xian Famous potters' by Wu Qian in 1786 (PS:Yixing is call “Yang Xian in Ancient). Wu Qian belives that Cheng Ming Yuan’s tea pot is the best in history. Tea pots he made were exceed all other tea pots of the three era. His works are equal with Shi Da Bing. It has been proved , the carved Calligraphy on Cheng Ming Yuan’s tea pots were written by famous calligrapher Cao Qian Rang. This modus operandi was continued upto now. Many famous literators, painters and politicians would like to writed their epigraph onto the purple clay tea pots to increase it’s value. They were invited by some great tea pot masters to their home to assist them making tea pots.

Another great master of this period is Shao Da Heng, his famous work is the 'Eight Diagrams Bundle Bamboo Pot' and the 'Fish turned to Dragon Pot'.

The most accomplishment were made by Cheng Shou Zheng, Yu Guo Liang and Pei Shi Ming. Cheng Shou Zheng’s 'De ball pot' and 'Archaize pot' won the gold award on the Panama international exhibition in 1919. He is the first 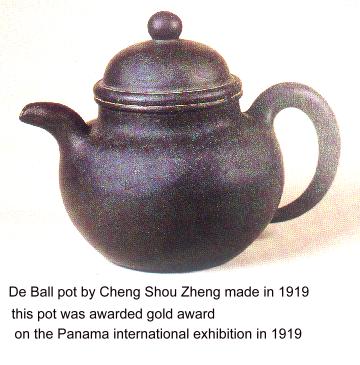 tea pot master who had won gold award internationally in the history of purple clay tea pot industry. Through the hard work of zisha pottery artists and tea pot masters of different generations, the purple clay tea pot present their rich culture and artistic quality to the world and gain the prestige by showing their special charm.
At the beginning of the 20th century, the purple clay teapots were awarded the first prize at Panama International Exposition. Then the gold prize at Chicago Exposition, London Arts Exhibition and Philadelphia International Arts Exposition. etc.