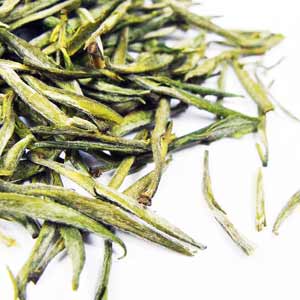 Junshan Yinzhen, the Yellow Tea, is the most exclusive tea among its group of tea.
When brew in a glass, the leaf which looks just like the sword moving up and down is described as 'Silent bamboo forest'.
Junshan Yinzhen is only produce using the tea leaves from the tea garden at the Junshan Island, which is located in the middle of Dong Ting Lake of Hunan Province.

To process Yellow Tea, the tea leaf must undergo the unique step called (Men-huang, the smothering process) which is the slow oxidation process of tea polyphenols such as catechin. As a result, it produces bright yellow color, refreshing flavor and sweet and mellow taste that are the characteristics of yellow tea.

In the history, it was believed that during Tang Dynasty, when Wencheng princess married to Tibet, she picked the Junshan tea as one of her trousseau.

Junshan Yinzhen became the tribute to emperor since Wu-dai (the Dynasty after Tang), and continued during Song, Ming and Qing Dynasty.

During Tang Dynasty, Junshan Yinzhen was called "Yellow tail leathers" (Huang Ling Mao), because when brewed, the yellow bud covered with down was standing up in the glass just like yellow pinion.

As recorded in the book Cha-Jing (The Tea Scripture written by Lu Yu), during Song Dynasty, it was known as "White crane tail leathers" (Bai He Ling), because of this tea was planted at the White Crane Temple (Bai He Si), when brewed using water from White Crane Well (Bai He Jing), it looked like White Crane walking in the water. Besides, because of its white down, it was also called "White down needle" (Bai Mao Jian). It was named as Junshan Yinzhen during Qing Dynasty.

Junshan Yinzhen has won the Gold Prize in year 1956 at the Leipzig Expo; its beautiful appearance and tasting note get a favorable opinion by the people.

In year 1972, when China re-gained a chair as a permanent member of United Nation Security Council, Junshan Yinzhen became the only tea to serve the Prime Ministers and Diplomatic Envoys from various countries.

In year 2006, Junshan Yinzhen has been selected by the China Commercial Affairs Department and Foreign Affairs Ministry as the National Gift Tea to Russia President Vladimir Putin.

3) Fragrance is called (Qing-xiang) that is greenish refreshing flavor.

4) Taste is brisk, sweet and mellow.

Yellow tea is still not widely available, since most tea farmers in China will manufacture more cost-effective green tea instead of yellow tea. But the supply is steadily increasing to fill the rising demand, and many internet vendors carry yellow tea in several varieties.There is much to like about yellow tea, as far as I'm concerned. It looks great, smells good, has at least as good health benefits as green tea, and it tastes much better, at least to my palate. Yellow tea is well set to become the next great success story in the world of tea.
1. This tea protects the body against free radical damage and hence slows down the process of aging.

2. It reduces the level of cholesterol in our body and hence prevents heart disorders.

3. It protects the body from various harmful effects of alcohol, viral hepatitis and liver tumors and hence prevents liver diseases.

4. It efficiently regulates the level of sugar in the blood and thus controls diabetes.

5. It has anti cancer properties which kill free radicals and reduce certain cancer types.
In general, it aids in stomach ailments, digestive disorders, headaches and depression too.

Junshan Yinzhen in itself is the 'Culture of China', which is on the top of Chinese tea manufacturing.

Observing and enjoying how the tea leaves moving up and down and feel the passage of time is the best way to enjoy Junshan Yinzhen.
In particular, it is more suitable to serve Junshan Yinzhen in long glass.
The Long glass is often used for serving exclusive Chinese green or yellow tea.

Inside long glass, Junshan Yinzhen stands up and it moves up and down as if bamboo leaves are falling down.

The secret of this unique movement of Junshan Yinzhen comes from its stem that is plucked together with bud. The stem contains water pipe. When hot water is poured into glass, water pipe rapidly absorb water and become heavy. As the result, bud stand up on the surface. Later on when bud itself absorbs water, it starts descending. In order to ensure the water pipe is "functioning", the bud must be carefully plucked and processed to prevent from any damage.

Due to the importance of its appearance, Junshan Yinzhen is only moderately rolled.
Therefore it has to be brewed longer at high temperature, such as 80-85 degree C for 5min.