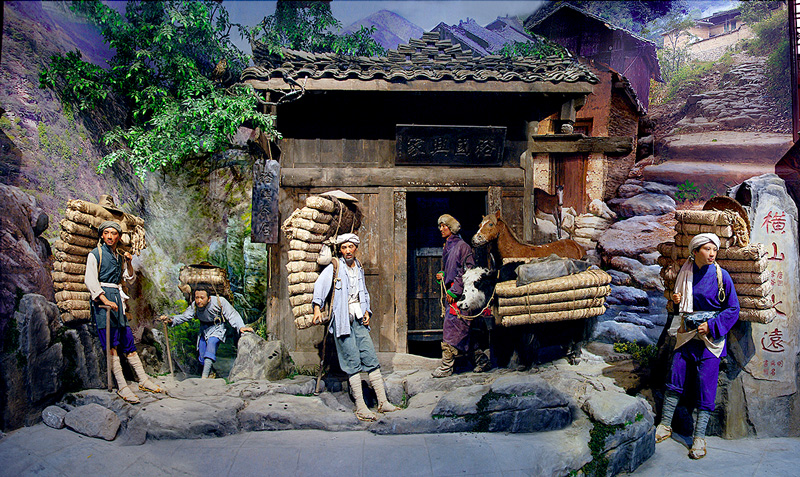 Anhua dark tea has a rich cultural background in the long tea history. Anhua is the birthplace of the first Qianliang tea, Black Brick and Fu Brick.
In Tang Dynasty(618–907), AnHua dark tea has become a tribute to the royal families and Anhua became famous for dark tea; during the Ming and Qing dynasty, many places along the Zijiang River used to have prosperous dark tea market.
Anhua was the center of Chinese tea market during the 500 years in Ming and Qing dynasty when its dark tea production was responsible for 40% of dark tea of the whole country among the five dark tea-producing provinces. After the liberation war, it was said that some minorities in the border region bought no other dark teas but the dark tea from Anhua.

Ancient Tea-horse Road which has been preserved well fully confirms that Anhua dark tea has ever played an important part in the tea-horse trade. The Tea-horse Road played a major role in the tea-horse trade. Thus Anhua dark tea gained its world fame. In 1595, during the Ming Dynasty, Anhua dark tea has been officially designated as the official tea for sale in the Northwest. Since then, business of Anhua dark tea continued in the Northwest for hundreds of years. With the evolvement of the tea-horse trade, many tea merchants from Shanxi, Shaanxi and Gansu went to Anhua to do dark tea business even to open tea shops and houses. In late Ming and early Qing Dynasty, the number of tea shops and houses was over 300 at the peak time. The dark tea was transported starting from some ancient tea-horse towns such as Xiao’an, Bianjiang, Jiangnan, Dongshi, Tangjiaguan, Huangshaping, Youzhou and Dongping, and down along the Zijiang River to Hankou, via Henan and Shanxi to the northwest or via Zhangjiakou to Kyakhta, an important border city of Russia. This was the ancient Tea-horse Road which is characterized by the horse-ship transportation

This road runs through thousands of miles connecting Asia and Europe, which also brought up a number of famous dark tea merchants in history. The dark tea business continues to nourish through generations.