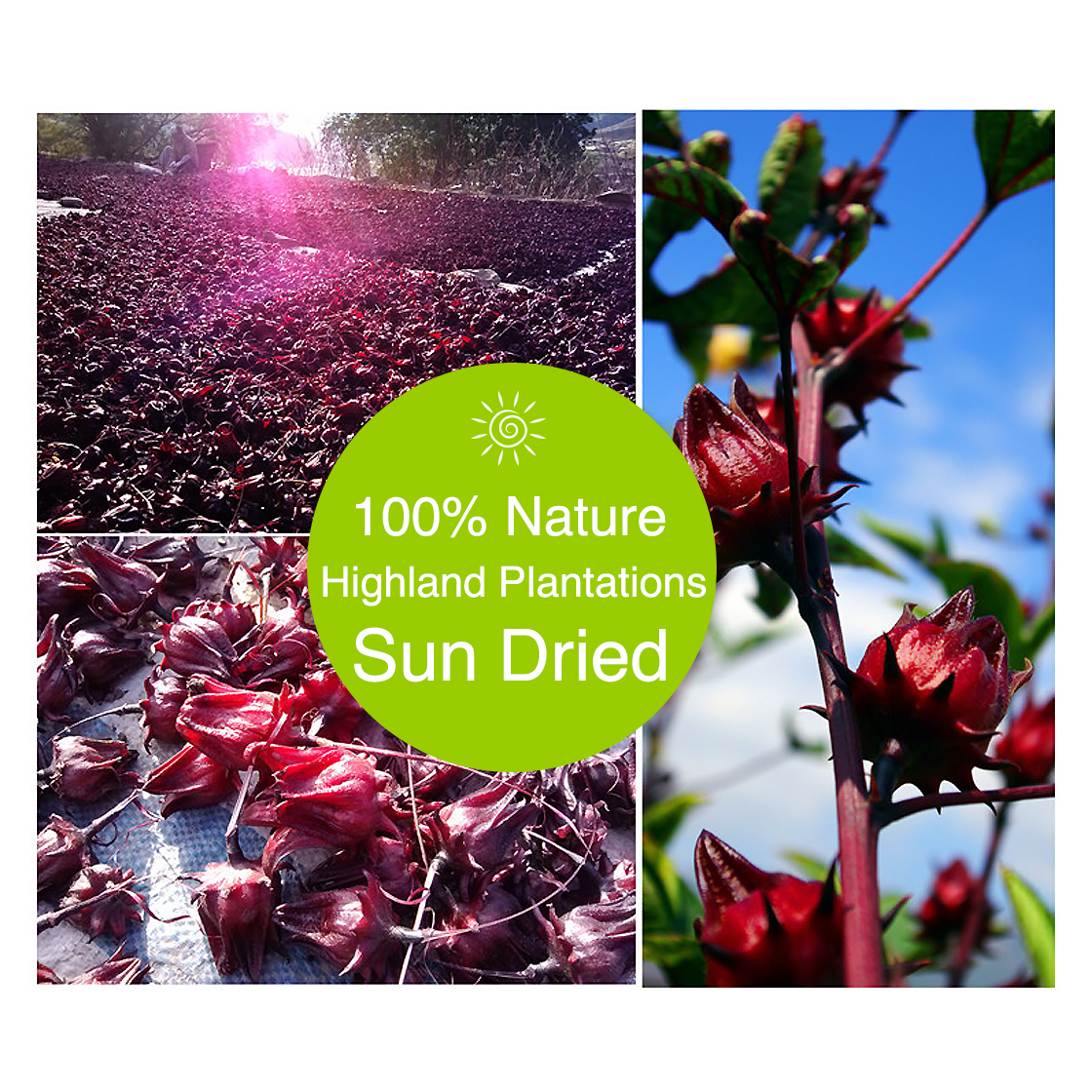 Roselle is a thirst quenching tea with vivid-red color. It has a natural lemony sour taste, and is enjoyable served hot or cold. We recommend you to blend it with some honey or ice-sugar unless you are obsessed with the tart fruit flavor.

It’s easy to mistake roselle for a juice in tropical countries because it’s commonly sold streetside and in food courts alongside fresh pineapple, orange, lemon and coconut juices. In Southeast Asian convenience stories, roselle is among the single-serving bottles and juice boxes. It also turns up, as a sherbet, in expensive ice-cream shops. But hibiscus tea has been consumed as a soothing evening tea for centuries in Egypt and elsewhere in the Near East. It probably first made a splash in the prettily-packaged US tea market as an ingredient in Celestial Seasoning’s Red Zinger tea back in the 1970s.

Botanically speaking, it’s Hibiscus sabdariffa L. (family Malvaceae) and it’s the bushy H. sabdariffa var. sabdariffa that produces the edible products.The edible parts used to make “juice” or tea (actually, an infusion) look like reddish dried-up buds. In fact, they’re not flowers but calyces. It’s the calyx, the red, fleshy covering enclosing the flower’s seed pod, which is used for flavoring, cooking and food coloring. The flower of this variety of sabdariffa is yellow, white or light pink.

Although roselle is being studied, it hasn’t yet been proven to have the healing powers of bael fruit. It is high in calcium, niacin, riboflavin, vitamin C and iron, as seen on this Purdue University page. And the beverages have no caffeine. In East Africa, “Sudan tea” is consumed as medicine to cure coughs. In Guatamala, roselle is believed to cure hangovers. In Senegal, a roselle extract is said to lower blood pressure. In India, Africa and Central America, infusions made from roselle calyces or seeds are prescribed as a diuretic, to stimulate bile production and to treat fever.

1. Combine the roselle and water in a large pot and bring to a full boil. Remove from stove and let steep covered for 15 minutes. The color should be a deep red-purple, like some kinds of grape juice.
2. Strain off the liquid through a sieve and throw away the roselle.
3. Stir in lemon juice, ice-sugar, honey (as you like).
4. Serve hot or cold.
After removing the pot from the stove, cooks in Latin America often add a few slices of fresh peeled ginger root. Jamaicans often add rum and ginger to the cold version. In Africa, mint is often added. In Southeast Asia, lemongrass is sometimes added in the boiling stage.

Hibiscus tea can be drunk hot or cold. As iced tea, the infusion is known to satiate thirst quite effectively. It is often recommended as an alternative to artificially made commercial “sport drinks” that are marketed to physically active individuals. Hibiscus tea’s ability to cool the body is well documented by cultures that include it in their diet or medicinal practices. This benefit is probably associated with the diuretic properties of hibiscus, a property that helps in the excretion of excess fluids from the body.

According to the book “Healing Herbal Teas,” fresh hibiscus flowers contain around 6.7 mg of ascorbic acid, a form of vitamin C, which is one of the more essential nutrients needed by the body. Along with this significantly beneficial substance, hibiscus is known to have anti-inflammatory and mild anti-bacterial properties. Thus hibiscus tea is often used as a supplement to help treat coughs and colds. Because of its cooling effect, it is especially effective in reducing the discomfort of fevers that may accompany such ailments.

Write Your Own Review

Only registered users can write reviews. Please, log in or register

If you have any question concerns about our products or don't find what you need on our site, please contact us via [email protected] and we'll reply soon!